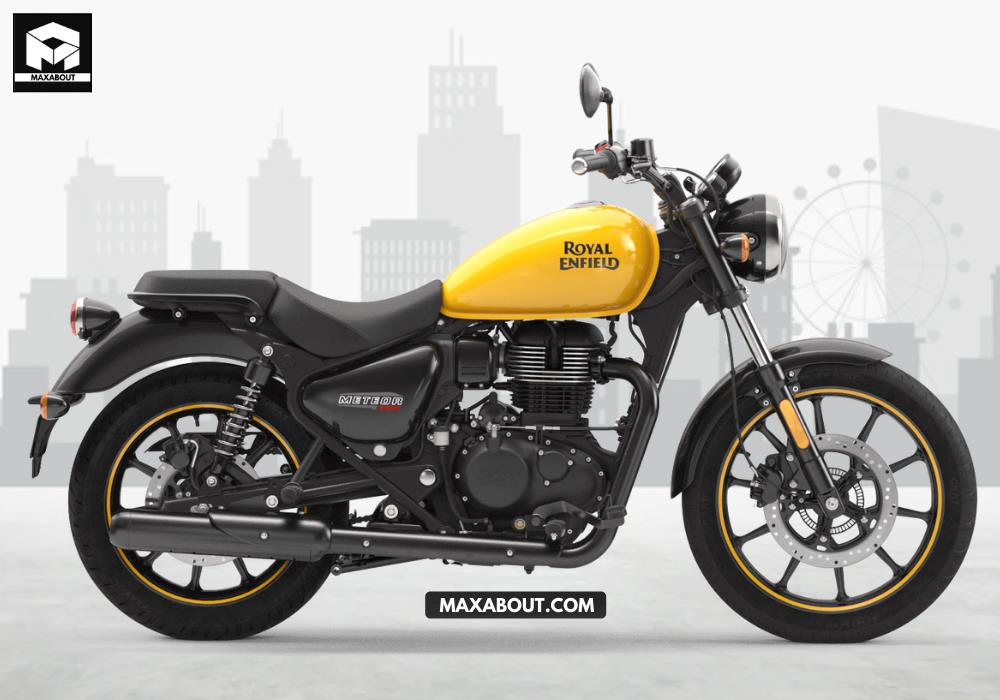 Whenever we hear the name Royal Enfield, the bikes of the old days come to mind, which was made for long distances. In the recent past, Royal Enfield has faced stiff competition from competitors for its cruiser line-up, prompting this segment-leading brand to launch the Royal Enfield Meteor 350 in the market in response.

Royal Enfield's cruiser lineup previously had Thunderbird's reign, which was introduced in 2002. It has brought in several facelift avatars over the years. However, the Thunderbird lineup was discontinued after the arrival of the BS6 emission standard. The company retired the name Thunderbird, and 18-year-old production was discontinued.

This decision was taken because, due to this, the company could only sell cruiser bikes in the international market. Royal Enfield wanted to bring a new cruiser bike to the market with a new name, a modern design and technology. As a result, the Meteor 350 was brought to the market; it has to be brought to the country as well as the international market.

The design of the New Royal Enfield Meteor 350 has been kept the same as the cruiser bike. As soon as you look at the bike, you start to remember your old long journeys or the journeys ahead. The Royal Enfield Meteor 350 has a curved fuel tank, attractive body panels, circular headlamps, tail lamps, turn indicators and chrome in many places to give it a cruiser bike look.

Starting from the front, the supernova has a circular halogen headlamp with an integrated LED DRL ring. By the way, it would have been even better if there was an LED unit, although the throw of this halogen lamp is best for high and low beams. Its LED DRL could have been even brighter. The bike has a large 13.6-inch windscreen, which has been named the "Touring Voyager" by Royal Enfield. This windscreen can be adjusted a little for height, but this process will require additional Ellen's tools. In the front, a front fender is connected to the front wheel, as seen in other cruiser bikes.

Due to the two-wheeler rules of India, all the guards have also been given this bike. A grab handle has been provided on both sides behind the rider seat where the luggage can be tied for a long journey. The back has a circular tail lamp and a turn signal indicator, which makes the look of the bike even more attractive. A small lamp is also given on the rear number plate.

The biggest change on the bike has been made in the instrument cluster. It is still a double pod cluster but has given the brand's tripper navigation function in the secondary display. Talking about the main cluster, it has an analogue speedometer as well as a small digital display that provides a lot of information. It gives information about the gear indicator, Odo, and three trip readings, clock, fuel indicator, service reminder, and echo indicator. The main cluster has a high beam, turn signal, ABS malfunction, engine check light, low fuel and low battery indicator.

The instrument cluster's secondary pod has a small TFT colour display, which is a standalone unit for the brand's tripper navigation function. Royal Enfield has partnered with Google to bring this feature to you. Tripper navigation can be activated by connecting with the smartphone, which can be used on the application provided by Royal Enfield. The brand has made it available for both Android and iOS. After opening the application on the phone, you need to click on the "navigate" feature, after which the phone can be added by following the instructions given on the screen. After being paired, you can put it in place and the display starts showing turn-by-turn navigation.

The suspension system of this bike has a 41 mm telescopic unit in front and a twin shock setup at the rear, with 6 step adjustability for preload. Braking duties in the bike are done by 300mm single disc with twin piston floating caliper at the front and 270mm single disc with single piston floating caliper at the rear end. This bike has dual-channel ABS as standard. In the New Royal Enfield Meteor 350, 19-inch alloy wheels with 100/90 section tyres in front and 140/70 section tyres with 17-inch alloy wheels have been installed in the back. Both tyres are tubeless, which makes the long journey even easier.

2023 Royal Enfield Meteor 350 can touch the range of speed from 0-100 kmph in around 15 seconds. This bike can reach its top speed of up to 120 kmph and offers a mileage of 35 kmpl which may vary according to the way the bike is driven and maintained.

Ex-Showroom Price is the Manufacturing Cost of the vehicle + Dealer/Seller Profit + GST (Goods and Service Tax) + Transportation Charges (from the manufacturing plant to the dealership). On the other hand, the On-Road Price is the actual cost you pay to the dealership to make the vehicle legal to run on the roads. It includes Ex-Showroom Price in your city + RTO Charges (Vehicle Registration) + One Time Road Tax + Insurance Charges. The On-Road Price also includes some optional things like if you opt for Genuine Accessories and Extended Warranty while buying a vehicle. Please note that the On-Road Price varies a lot across different states in India due to different percentages for the State Registration Charges.

New Royal Enfield Meteor 350 is currently the country's most reasonable entry-level cruiser bike. It competes with the Honda Highness CB350, Benelli Imperiale 400 and Java 300 Twins in the Indian market.

Verdict- Should You Buy the Royal Enfield Meteor 350 or not?

Royal Enfield is known for making the best looking retro bikes, and the Meteor 350 is no different. It carries forward the cruiser bike brand's heritage design and signature exhaust note. The New Royal Enfield Meteor is a revolutionary bike for the 350cc segment of the brand 350, which has been updated with new design, features, and performance. Its new design elements and hardware make this bike an ideal cruiser bike that travels long distances on the highway as well as runs easily in the city's traffic.

With this bike, the company has provided the privilege of customising it. This allows you to personalise your bike. Customers can prepare their bikes in various configurations. It comprises eight separate exhausts that are legally approved. It also has the option of touring with a footpeg and seat. The company is offering a 3-year warranty on all accessories. Adding up all these privileges gives the result as the best buy, and this feature-loaded bike is worth buying.

Available Shades in Royal Enfield Meteor 350 to Choose From

The Meteor 350 is a great bike for cruising long distances with a comfortable riding experience. The power and looks are great, and the mileage is unbeatable. Off-roading is a breeze with the heavy-duty body and powerful engine. I have been riding my black Meteor 350 for 10 months now, and have done two services so far. It has been an amazing experience and I would definitely recommend it for anyone looking for a great bike.

The Royal Enfield Meteor 350 is a great bike with excellent sound, feel, handling, power, ABS and almost zero vibrations. It also has a moderately stiff rear suspension and basic halogen headlights, which is a slight downside. However, these negatives don’t take away from the overall experience and I would give the Meteor 350 four stars.

Harish Kumar | One month ago
helpful 0

The Royal Enfield Meteor 350 is a fantastic bike to ride. It is comfortable, powerful and the mileage is fantastic at 40 kmpl. It's a pleasure to ride and feels like you're a king sitting on this royal bike. It looks luxurious and is an amazing experience. No one can beat the performance of the Royal Enfield Meteor 350. It is an incredible bike that will bring you pleasure and joy every time you ride it.

I have been riding the Royal Enfield Meteor 350 for some time now and I absolutely love it. It is perfect for both touring and riding purposes as it is lightweight and has great balance. The length and weight of the bike are just right, making it great for even the most enthusiastic riders. The combination of comfort and convenience, as well as speed, makes it the perfect bike for anyone who needs it.

The weight is easy to manage, even for beginners, and the styling and look of the bike gives it a cool and bulky feel while riding. The mileage is also great and the seating capacity is perfect. All in all, I would highly recommend the Royal Enfield Meteor 350 for anyone looking for a comfortable ride.

Royal Enfield has come a long way in recent years. Their bikes offer more power, better styling, and increased performance. With increased reliability and a wide range of models, there is something for everyone. Whether you are a beginner or a seasoned rider, there is something for you. Their bikes offer a classic look and feel, with modern amenities like LED lighting, ABS brakes, and Bluetooth technology. With Royal Enfield, you are sure to find a bike that is perfect for you.

After having owned a BMW GSA 1250, I can confidently say that it had more issues than all of the Enfield motorcycles I have owned combined.

Enfield's bikes are perfect for those who want a great quality bike at an affordable price. With their focus on quality, reliability and customer satisfaction, Enfield can quickly gain a strong reputation in the market. With this, they can potentially become a leader in the industry and capture a large portion of the market.