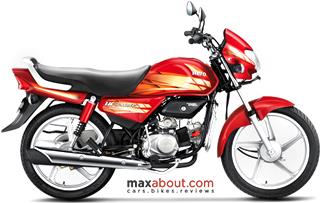 Hero HF Deluxe is an entry level bike from Hero which takes on other modern commuter bikes like Bajaj Platina. This bike is more or less a redesigned version of HF Dawn. This bike targets urban commuters and has been recently renamed after Hero’s separation from Honda.

This bike is based on the same platform of HF Dawn and has almost identical physical dynamics. The original idea behind the conception of this bike was to offer a cheap alternative of Bajaj Platina with better looks and style than Hero’s existing bike HF dawn. It has an integrated visor and cowl which looks neat and stylish with its crystal clear headlight. Its face looks completely different than Dawn. Silver finished alloy wheels and front forks also complement the styling of this bike. From sideways, this bike may remind you of Dawn as its rear fender and side panels resemble to its younger sibling. The new model features all new graphics and stickers. One can easily notice the chrome shield on its silencer and smart cut on its fuel tank. To make it look modern, Hero used a silver finished rear grab rail which looks nice and is easy to hold. Rear tail light is slightly improved and it features orange coloured indicators which could have been flexible like Platina. Tank opener is still not integrated in its fuel tank.

Hero has altered its trusted 100cc engine to enhance the performance of this bike in comparison to Dawn. It uses a mono cylinder, air-cooled, OHC engine. This 4-stroke engine now pumps out a peak power of 7.8 bhp at 7500 rpm with a maximum torque output of 8 Nm which is accessible at 4500 rpm. This engine is mated with a four-speed manual gearbox with all gears up-shift pattern.

The slight alteration in this engine is easily noticeable. The instant arrival of power and torque makes the difference between this bike and HF Dawn. Throttle response is very impressive and that’s quite evident in its city performance. The crispy gear ratios avoids turbo lag and this bike feels quite enthusiastic in its initial phase. The mid-range of this bike is quite effective and that’s what gives it an advantage over others. It settles really well at high rpms and its refinement is also commendable. There is no need of frequent gear shifting as gear ratios are perfectly matched with this engine. The bike does 0-60km/hr within 8 seconds and you can say it feels faster than Platina. However, when it comes to high speed cruising, this bike can’t go pass Platina as you will find it hard to make this bike cross the speed of 90km/hr. Yes, there are no signs of vibrations but still high end performance is not satisfactory. In fact, Hero has emphasized on its city performance and that’s quite striking when you drive it. Given the overall refinement and performance of this engine, it’s a nice entry level bike.

The long and wide seat of HF Deluxe completely justifies its name. You feel at rest on this bike and with front set foot pegs, things just get better. The riding posture including your palm grip is very convenient for daily usage. The redesigned fuel tank now allows you to stick your knees firmly to it which gives you a better hold and control of this bike feels.

Similar to HF Dawn, this bike also has under seat storage space with additional utility box, bag hook and side panel. To enhance your safety, it features front leg guard and powerful headlight for better vision at night.

Hero HF Deluxe shares its suspension and braking system with HF Dawn. It sports telescopic forks at its front and at the back; this bike has 2-step adjustable hydraulic shock absorbers. Certainly, it’s not as comfortable as Platina but there is nothing much to complain about. Both wheels of this bike are fitted with drum brakes. Its front and rear wheel features a drum brake of 130mm and 110mm respectively. You won’t find it hard to stop this bike effectively.

The ride and handling of this bike is almost identical to its younger sibling. The bike has the same ground clearance (165mm) and wheelbase (1235mm). It’s also scary around corners but its high speed stability has improved marginally. The bike treats you with its light handling and its one of the lightest bike in its segment. Ride quality is also satisfactory as it’s quite comfortable even with a pillion rider. It manages to cross most of the potholes with ease.

This bike is available with 18 inch alloy and spoke wheels. New HF Deluxe is offered in four variants and five dual tone shades.

New HF Deluxe ranges from INR 38.7-42K (ex-showroom, Delhi (approx., may vary). This bike offers acceptable looks and performance. New model is also available with modern features like alloy wheels and self-start. It’s a nice option for those want a Hero bike which is cheaper than Splendor and looks more stylish than HF Dawn. This bike is capable enough to give a tough competition to its biggest rival, Bajaj Platina. Ride and handling of this bike is also very satisfactory. Moreover, its high resale value, fuel efficiency and wide service network of Hero is an additional benefit. For us, it’s a complete value for money bike as it’s easy on pocket and comes with a reliable and refined engine.

Available Shades in Hero HF Deluxe Self Alloy to Choose From

First of all HF Deluxe is a value for money bike and it is very comfortable for long rides also. Suitable for any age group working people also go for this and enjoy every second of life with HF Deluxe and the mileage is simply amazing around 90 kmpl.

Best in class .... this is an awesome bike for those who loves to ride with comfort. I bought this deluxe thing in just 55500 on road with all accessories. If you want a bike which never lets u down then just make it own, I know u all have lots of competitors to buy but. It is far better than Platina, mileage is a bit less than Platina but other bike nothing can beat this, it is better than Star City Plus, Discover 100, Mahindra and all Honda Dream series bikes.

Cons: Top speed not more than 85 but easily reaches 70 kmph

it is good in mileage

Very Very good. less expenses, durable if handled well, none other than CD Deluxe. Excellent for traffic and in jig-jag driving. Good Value for Money.

bad luks ..
bad engine performance........
over all its only bad nothing gud about this bike..
instead of this bike ! bikers should prefer bajaj platina 125cc.....