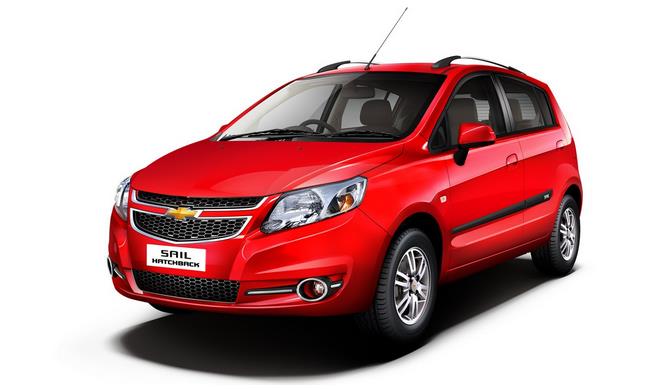 When it comes to premium hatchbacks in India, no car is known better than Maruti Suzuki Swift. Aveo U-VA was the best attempt of Chevrolet to take on Swift but soon after its launch, it was pretty clear that U-VA has been rejected in the market and since then Chevrolet is just towing this car in India without any up-gradation. Now when most of the car makers are eyeing this segment in India, Chevrolet has decided to start a new innings in this segment with a new car. This new car is known as Sail U-VA and has been launched ahead of the festive season in India. Everyone is fighting hard for the number 1 spot in this segment and many cars like Ford Figo and Toyota Etios Liva are giving a tough competition to Swift. So if they can why can’t Chevrolet? And with this hope Chevrolet is ready to fight hard. Will it be able to mark its presence? Let’s find out.

Chevrolet has paid a lot of attention to the designing of new U-VA. It’s quite clear when you look at it for the first time. The car may not be as stylish as Swift or VW Polo but certainly looks much better and modern than other rivals like Ford Figo and Toyota Liva. The car looks best when seen from its front. The face of this car is very simple yet stylish. Chevrolet has done a commendable job as this car truly feels a generation ahead of Aveo U-VA. Its angular headlights and split front grille makes it an attention seeker. The bonnet also complements the front styling and gives it a mature and stable look. The front bumper has nice edgy lines on it which makes it look aerodynamic. This bumper houses two round shaped fog lights and a simple air dam in it.

Move to the side of this car and you can easily notice the high ground clearance of this car. Body coloured outside mirrors are mounted on the front gates. The car has noticeable wheel arches and along with 14 inch alloy wheels it does look sporty. The car has full size gates and features nice lines on them. The rear quarter glass is absent and the C-pillar is not that stylish. The rear look of this car is very subjective. Tall tail lights are fitted in this car with a simple boot gate. This type of styling is out-dated and only Chevrolet can answer why did they opt for such design. The simplicity at the back may not work in the favour of this car. Rear bumper is also quite basic and features two reflective lights on it. You can say it resembles to Figo from its back and undoubtedly Figo looks much better than it. The top variant of Sail U-VA also features rear wiper and body colored spoiler. The car is not extraordinary in terms of designing but can easily be remembered.

Similar to Aveo U-VA, Sail is also very spacious from inside. The car uses dual tone interiors and looks completely different from its predecessor. The cabin has taken a big leap forward but if you compare its quality with others, there is still room for improvement. The plastic quality specially is a matter of concern which should have been better. Other than this everything looks perfectly placed. It’s a very airy cabin with stylish door pads and triangular inside door handles. The V-shaped three spoke steering wheel and gear knob is wrapped in leather and enhances the aura inside. You will be amazed by the legroom and shoulder room inside. The front sitting is quite comfortable and offers ample amount of headroom but tall people at the back may complain about the headroom. It’s very spacious for five people.

There are many features stuffed in this car for your comfort and convenience. The front seats of this car are very comfortable and offer you maximum comfort as there is adequate amount of back and under thigh support. However, its driver seat is not height adjustable. The rear seat is also comfortable and feels optimum for seating of three adults but don’t offer you the comfort which you get in Swift or Polo. The car features power steering, AC with heater and all four power windows with buttons placed ahead of gear knob. It has electrically adjustable outside mirrors, tilt steering and digital tachometer. Other features include remote key less entry, rear defogger and digital clock.

Dashboard also uses dual tone colors on it and comes fitted with an aggressive V-shaped central console which makes it look attractive. The shape of central AC vents and the area above it looks extremely dynamic and with silver finishing on this central console, things just get better. The design and texture of this dashboard is completely different from every other Chevrolet car. This dashboard feels better than its competitors like Toyota Liva but it can’t match the standards of Swift and especially VW Polo. The plastic quality of the buttons used on its central console could have been better as these things matter in this department. This dashboard sports a glove box in it. It has a decent boot capacity of 248 litres which can be increased by folding its rear seat. The car also has cup holders in front console, bottle holder, front door pockets and back pockets on its front seats.

The central console comes with an integrated audio system. It’s a radio, CD and MP3 player with four speakers. It has in built AUX-IN and USB ports for direct connectivity of music gadgets. The car also features Bluetooth connectivity with vital features like Mobile music streaming, hand free, phone pairing and make or reject a call. There is also a 12V accessory socket at its front. However you will miss the steering mounted audio and Bluetooth controls which should have given in the top variant.

First, let’s talk about its petrol engine. Sail feels much better if we compare it with its both siblings, Beat and Aveo U-VA. The responsiveness and refinement of this engine is very satisfactory. Being a DOHC engine, it tends to be less noisy and there is not much harshness even if you push it hard. We won’t say this engine is a trend setter but certainly feels better than many of its competitors like Figo, Liva and even Polo if it’s about refinement. The engine pulls up brilliantly at low speeds due to its accurate gear ratios. The gearbox equipped in this car feels the best in its segment. Yes, once you go pass 2500rpm, it’s not as smooth and quick as the K-series engine used in Swift but is quite capable to give it a tough competition. It’s only its heavy weight which makes it feel a bit slower in comparison to Swift.

Otherwise this car manages to complete 0-100km/hour within 14 seconds which is not bad at all. However, after crossing the speed of 150km/hour, this engine becomes a bit audible. No car stands in front of the diesel version of Sail U-VA in its segment; not even Swift. Don’t be surprised if you find this car much exciting than Swift and others in terms of performance. The engine used in Sail is similar to that of Swift but the torque output has increased considerably and the turbo kicks in as early as 1750 rpm in comparison to 2000rpm of Swift which can easily be noticed in its performance. The engine feels extremely refined and cars like Figo are nowhere near Sail U-VA. The engine suffers almost no turbo lag and does 0-100km/hour within 15 seconds which makes it quickest in its segment. The additional 15 Nm of torque plays a vital role in its better performance than Maruti Swift. The mid-range is a blast and once you go pass 2000rpm, soon you will find yourself touching a speed of 160km/hr. The car needs no frequent gear shifting and gives you a stress free and enjoyable ride.

The gas filled shock absorbers of Sail U-VA makes it an extremely comfortable car. You won’t need to slow down the car on every speed breaker as most of the bumps are taken very easily by this car. Even with full seating of five, the car doesn't complain much. The braking system in this car involves disk brakes at its front with drum brakes at its back. The top variant also features ABS with EBD for safe driving.

Thanks to its high ground clearance (174mm for petrol and 168mm for diesel), wheelbase of 2465mm and superb suspension, this car manages to give you a pleasing ride. It’s perfect for long journeys and bad city roads. You can easily go pass those nasty speed breakers and potholes which often bother you in other cars. The tyres are capable enough to hold the car around sharp corners. The stability of this car at high speeds is also commendable. Its steering response is pretty accurate but its minimum turning radius of 5.1 is a matter of concern and it’s not that easy to handle it in city traffic. You will miss the light handling of Swift and around corners also, Swift feels better than Sail. Ride quality of this car is very good and even better than Swift but loses out in terms of handling.

Similar to other Chevrolet cars, Sail U-VA also comes with a warranty of 3 years/100000 kilometres.

Chevrolet Sail U-VA ranges from ?4.44 lakhs - 6.62 lakhs (ex-showroom, Delhi). This car will be sold along with Aveo U-VA. Chevrolet has priced this car very close to its biggest rival, Maruti Swift. It’s a full size hatch offering optimum space and comfort with decent looks. If you have to choose the petrol variant between Swift and Sail then we won’t recommend you Sail because it lacks that sporty character and high on performance of Swift. Moreover Swift has a much higher resale value than any Chevrolet car. But if you talk about diesel variant then for the first time in many years, Sail is the first car which feels much faster and enthusiastic than Swift. In fact it’s the diesel avatar of this car which makes it a complete value for money car. Yes, Sail is more expensive than Swift and things would have been much better if it would have been priced low but as for now this car has all the abilities to cut down the waiting list of Swift.

Available Shades in Chevrolet Sail U-VA to Choose From

What is the Ex-showroom Price of Chevrolet Sail U-VA Diesel PS?

General Motors have added a new base version to the series of its Cheverolet Sail U-VA diesel.
Submit an Answer

What are the Dimensions of Chevrolet Sail U-VA?

Chevrolet Sail U-VA has a total length of 3946mm with a width of 1690mm and overall height of 1503mm.
Submit an Answer

While buying a car we have to consider sum total of it like space, comfort, safety, brakes, engine, mileage, suspension, ingress and egress, driver's view, feeling of fatigue during long drive. I don't feel pain in the back and in neck while driving 6-7 hrs at a stretch. My age is 50 plus. So I think this is the one of the best hatchbacks.