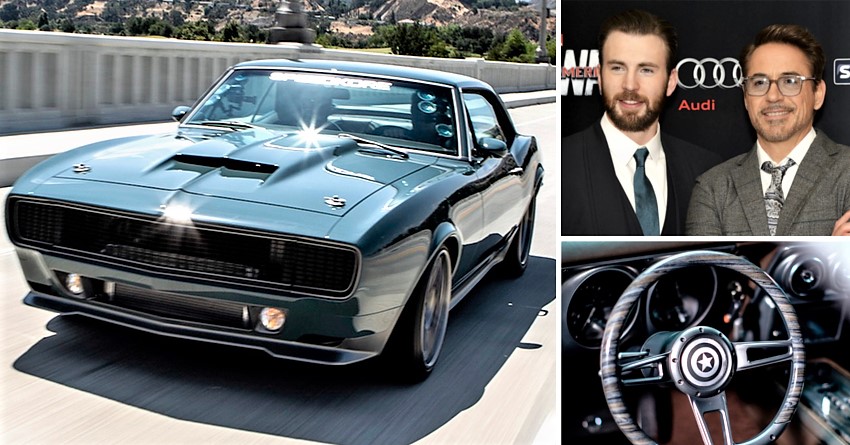 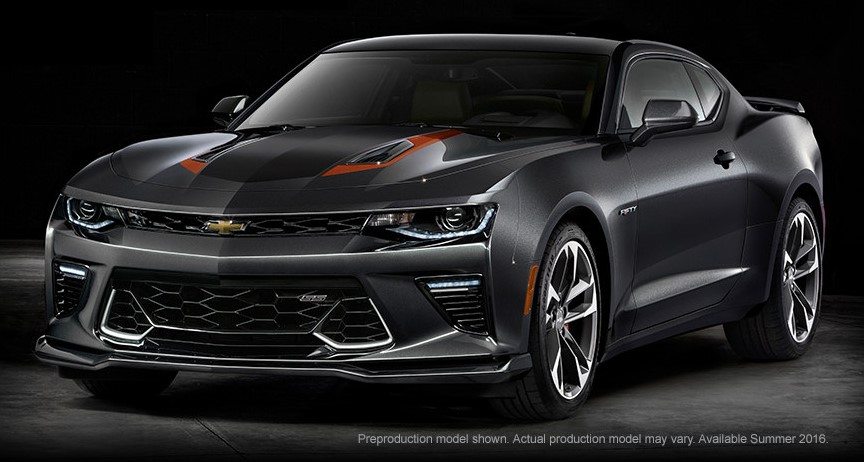 Chevrolet Camaro is a very popular car from GM which is yet to hit Indian shores. The car is in its fifth generation and it became the centre of attraction when it featured for the first time in Hollywood movie series, Transformers. It also got a lot of attention in India last year also when Chevrolet displayed it at Delhi Auto Expo. In this article, we try to find out the reasons behind the success of this car.

The dynamic face of Camaro is the biggest center of attraction in this car. The low positioned circular headlights comes integrated with its split black colored front grille. This long horizontally placed front section forms the mouth of this car which gives it an aggressive look. The separated air-dam also complements the front styling of Camaro and gels well with the round shaped fog lights which are placed on its front bumper. The up-raised section of its long bonnet further makes it look appealing. The optional black racing stripes are the characteristic feature of Camaro which certainly adds to the sporty character of this car. The extended front overhang of Camaro makes it look distinctive when seen from either side. The bulgy wheel arches and optional polished black and silver 20 inches alloy wheels simply gives it aggressive looks. The narrow side mirrors and swept back roof of Camaro looks aerodynamic and sporty. The rear coupe look with short rear overhang goes well with styling of this car. The lip spoiler of Camaro gives it a unique identity and suits the rear designing of this car. The slanted rear glass and body panels with sharp lines further enhance the visual charm of Camaro.

Camaro comes with premium black colored interiors. The dark shade inside gives it the true essence of a sports car. The leather wrapped steering wheel and seats add premium touch to this car. The quality of plastics and fabrics inside is quite satisfactory. The low positioned seats offer you optimum amount of head and shoulder room. The full size seats can easily occupy you by giving you nice under thigh and back support.

Camaro comes with vital comfort features like electrically adjustable, foldable ORVMs, power windows, electrically adjustable seats and steering, remote start and powerful HVAC. Head up display with multiple settings is a premium feature in Camaro which allows you to get all important information on your windscreen.

The black colored dashboard comes equipped with a central and instrument console. The sleek design of AC vents really works well and looks stylish with silver finishing. The touch and texture of this dashboard is quite up-market. It has a combined analogue digital instrument console with blue back-lit. This dashboard also comes with an integrated roomy glove box. The car also features many cubby holes with considerable amount of boot capacity.

The car has multimedia touch screen system in its central console. It’s available with Boston Acoustics premium nine speakers sound system. You can also directly connect Camaro with your Smartphone and use high tech apps. The car features satellite radio, navigation system and Bluetooth connectivity with all audio and Bluetooth controls mounted on its steering wheel.

Camaro is powered by two different petrol engines. Its V6 cylinders, 3.6L petrol engine produces a peak power of 323 bhp at 6800 rpm while the torque output of this DOHC engine is of 278 Nm which arrives at 4800 rpm. This engine is served with a manual six-speed gearbox. The second petrol unit in Camaro comes in two different states. The basic version of this 6.2L V8 engine generates a maximum power and torque output of 426 bhp and 420 Nm which arrives at 5900 rpm and 4600 rpm respectively. This engine is also mated with a six-speed manual gearbox. This is the most powerful state of engine available in Camaro. This 6.2L V8 cylinders engine also comes with active fuel management which reduces the specifications of this engine to give better fuel economy. This engine pumps out a maximum power of 400 bhp at 5900 rpm with utmost torque output of 410 Nm arriving at 4300 rpm. This engine is mated with a six-speed automatic transmission. All engines of Camaro supplies power to its rear wheels only.

Camaro always feels on the faster side with its refined and powerful engines. The smaller unit of Camaro takes even less than 7 seconds to reach 0-100km/hr. With this engine, Camaro can easily cross the speed of 225km/hr but the real fun begins when you drive its V8cylinders engine. The car races from 0-100km/hr in less than 5.5 seconds. It’s a very refined engine which comes with well-matched gear ratios.

The V6 engine is expected to return a fuel efficiency of around 11-12km/ltr while its V8 engine may return a mileage of around 8-9km/ltr. Camaro comes with vital safety features like 6-airbags, ESP, traction control and automatic crash control.

Camaro features multi-link independent suspension system at its both ends. All wheels of Camaro come equipped with Brembo disc brakes and ABS with EBD and brake assist for controlled braking.

The light electronic steering and independent suspension system of Camaro gives you enjoyable ride and handling. The wide Pirelli tyres and extended wheelbase of 2852mm brings stability to the ride of this car at sharp corners and at high speeds. The car remains well in control thanks to its effective braking system.

Internationally, six variants of Camaro are available in six standard and three optional colors with warranty of 3 years/36000 miles (58000 kilometers).

Chevrolet is yet to confirm if they will launch Camaro in India but as speculated, the car may arrive India early next year. It will be also interesting to see what changes Chevrolet will bring to Camaro to make it fit for our Indian roads. If it arrives in India with a reasonable price tag then we think it will be a complete value for money car.

Most Popular Answers for Chevrolet Camaro

How much money is required to buy Chevrolet Camaro in US Dollars?

Chevrolet Camaro starts with a price tag of $ 25,700 and goes above $ 60,000 for the performance variants. It is available with 6-speed manual as well as 8-speed automatic transmission with paddle shifters. The car is available in many variants while the top spec model comes with options like heated seats and steering wheel, 8 inch touchscreen infotainment system, 24 color interior lighting system and magnetic ride control. It is available in coupe and convertible body styles.
Submit an Answer

Chevrolet Camaro ZL1 can only be imported to India and you can contact the nearest dealership for the import of used Camaro. They can help you find a good car from some other country and you can pay the duties levied on the car and successfully import it. The car comes with a huge 5.8 L petrol motor producing 580 HP and used lightweight parts.
Submit an Answer

When will Chevrolet Camaro launch in India and what would be the ex-showroom price?

The Chevrolet Camaro was expected to launch a time ago but the expectations have faded away this time. The car was spotted in India but later it was confirmed that it is not here for Indian launch but was a part of global testing schedule. India do not has a muscle car market and car makers like Ford, Chevrolet and Dodge are planning to launch their vehicles here, with Ford being the number one in terms of preparations. The Ford Mustang has been spotted with the new generation Endevour, making its launch confirmed in the upcoming time. The Camaro will be a 2016 project and would launch with a price close to INR 40,00,000-50,00,000 that too based on the trim being chosen. It features a 6.2 L V8 engine, producing 426 BHP.
Submit an Answer

Chevrolet Camaro Coupe has a ground clearance of 110 mm, which is the only factor making it unsuitable for the Indian roads. No doubt it can be used easily here, but few bumps can shatter the beauty for the down side and the repairs will in turn shatter the rider. When Chevrolet will officially launch the Camaro in India, they will definitely add some millimeters.
Submit an Answer

Be the first to write a review for Chevrolet Camaro